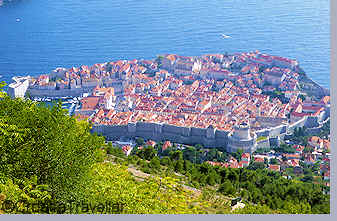 Taking the cable car to the top of Mount Srd is a must-do experience in Dubrovnik. At 415 metres above sea level, the views from the top are staggering. On a clear day you can see up to 60km, taking in Lokrum, the Elafiti Islands and a huge sweep of the Dubrovnik coastline.

With such a birds-eye view of potential invaders, it's no surprise that there's a fortress on top. Napoleon Bonaparte was the first to spot the defensive potential of Srd hill. He began construction of Fort Imperial (or Fort Napoleon) in 1806, soon after Dubrovnik capitulated to French rule, and completed it in 1812. (See more on Dubrovnik history) Alas, his tenancy was a short one. The Austrians took possession of Dubrovnik in 1815 and set about enlarging and expanding the fort. By the end of the century, the fort's defensive function lost importance as the Austro-Hungarian empire annexed Bosnia-Herzegovina. The fort fell into disuse until the attack on Dubrovnik in 1991. A group of defenders from the city managed to hold on to the fort even after being badly outnumbered by the attackers. Since then it has become a beloved symbol of Dubrovnik's special spirit.

Fort Imperial became a disco for a while but now houses an exhibition intended to become the Museum of the Homeland War. Still being constructed and expanded, this museum aims to convey to visitors the trauma of Dubrovnik's shelling in a series of maps, artillery exhibits, audio recordings and videos. Opening hours are 8am-8pm (4pm in winter). Admission is €4.

Whether or not the Museum reaches fruition depends upon the future of Srd hill which is currently shrouded in controversy. A plan to construct a golf course and luxury residences at the top of the hill sparked vigorous local opposition among environmentalists concerned that so much public land was being turned over to private development. Srd hill's unique place in Dubrovnik's history also inspired local patriots to oppose the project (more). A referendum was held but the bill passed. As Dubrovnik is a World Heritage Site, UNESCO gets to weigh in. A recent report allowed the project to go ahead but with modifications.

Further evidence of Srd Hill's almost mystical appeal to the locals is the large white cross next to the cable car station. The lustrous stone for the cross and surrounding structure came from Brac Island.

The original cable car was built in 1969 but was destroyed in the 1991 bombing of Dubrovnik. Only in 2010 and after an investment of five million euros was the cable car line restored and put into service. The two cabins now hold 30 passengers and speed up to the top in less than four minutes.

It's possible to drive or take a taxi to the top if you're short of time. You can also walk up the hill if you like but the path is very exposed to the sun. Not recommended on a hot, summer day! The path is rocky; good shoes are a must. To walk up, start from Jadranka Cesta near the "Welcome to Dubrovnik" sign. As you walk up the zigzagging road you'll pass the "Stations of the Cross" panels which depict Christ's journey to his crucifixion. Another great option is to take a tour that includes transport, a local guide and a visit to the Old Town. More.

In addition to a cafe-bar, Srd Hill boasts the aptly named Panorama Restaurant and Bar which offers fine dining in an unforgettable setting. The restaurant is open daily all year for lunch and May to September for dinner. Advance reservations are advisable. More here.

The cable cars start running at 9am and run every half hour until midnight in the summer, stopping earlier in the off-season. It is possible to buy tickets online at the cable car website, at the cable car station or at any travel agency in town.

To reach the cable car station, walk up the stairs at Boskoviceva out the northern gate "Buza". Keep climbing up following the signs and you'll come to the cable car station at Kresimira IV which is also the airport bus stop. Shortly after the gate you'll come to a store that sells cable car tickets. It's also possible to take the No 8 bus from Pile but it's a long ride. There can be long lines to board the cable car during the summer season. The entrance is exposed to the sun which makes it advisable to wear a hat.

The top of Srd Hill is mostly rocky but the area around the station has been developed to include a panoramic restaurant as well as several cafes and snack bars.